It’s time to take a run at getting funding back for the Weed Management Area program. Assembly Member Joan Buchanan has submitted a bill to do just that, and we will visit legislators to provide information about the impacts of invasive plants and to support this important program. Day at the Capitol features policy updates, advocacy training, and visits to legislative offices in the Capitol. It’s an invigorating experience in direct democracy and a great opportunity to educate decision makers about the importance of strong state policy and funding for invasive plant management. No need for prior advocacy experience – we’ll team you up with more seasoned attendees. We need you to share your expertise and passion with our elected officials!

Register Now! (the event is free, but we need your information to help us plan the day)

Send a support letter from your organization. In 2006 over 100 groups signed on! Use the sample text and follow the directions for submission. 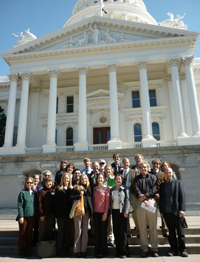 2010 attendees at the Capitol

Previous Days at the Capitol

Our 10th Annual Day at the Capitol! We focused on supporting AB763 from Assembly Member Joan Buchanan, which greatly strengthened the state’s ability to respond to new aquatic weeds in the Delta, while giving the Department of Fish &Â Wildlife responsibilty for assessing the invasive potential of these weeds. The bill later passed through the legislature and was signed into law by the Governor. Success!

The 9th Annual Day at the Capitol, March 14, 2012, began with presentations by state and utility officials, including Assembly Member Joan Buchanan, author of AB 1540 to stop South American spongeplant in the Delta. In the afternoon we visited the offices of all 120 legislators, distributing the state?s new Strategic Framework on invasive species and asking for them to support invasive plant management programs.

On March 16, 2011, the 8th Annual Day at the Capitol, attendees shared the importance of maintaining funding for weed management throughout the state, both for Weed Management Areas and for the California Department of Food and Agriculture.

On March 11, 2009, attendees heard updates on the state’s bond crisis and the newly created Invasive Species Council of California.
In the afternoon, we headed to the capitol to meet with legislative staff. Our recent study on economic impacts provided a good topic of discussion. Afterward over a beer, long-time participants commented that the general level of awareness of the invasive plant issue seemed to have grown significantly in the last few years.

The 5th Annual Day at the Capitol, March 12, 2008, featured updates on the California Wildlife Action Plan, the long-range vision for CDFA’s weed programs, statewide mapping efforts, progress in implementating the state weed plan, and the potential for establishing a statewide invasive species council. The advocacy in the afternoon focused on urging
support for continued funding for the state’s Weed Management Area (WMA) program, and formation of an interagency Invasive Species Council. 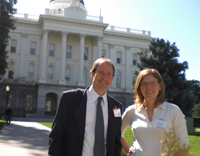 Getting ready for legislative visits

The 4th Annual Day at the Capitol, March 14, 2007, brought weed workers and concerned citizens to Sacramento to hear about state weed programs, funding sources, and new initiatives. The advocacy in the afternoon focused on urging
legislators to support SB 311 (Cogdill) to bring Weed Management Area funding up to $2.5 million.

Attendees heard updates on key Sacramento issues during the morning session, then met with representatives or staffers at nearly 50 legislative offices in the afternoon. Visits focused on two positions: support for AB 2479 to fund local Weed Management Areas, and implementation of the 2005 California Noxious and Invasive Weed Action Plan produced by the California Department of Food and Agriculture (see Position Statement). Advocacy for WMA funding was enhanced by letters of support sent by over 100 organizations statewide. Efforts resulted in $1.5 million in renewed funding for the WMA program.

Resources Secretary Mike Chrisman joined Secretary A.G. Kawamura of the California Department of Food and Agriculture in speaking to the standing-room-only audience. Both agency heads noted that increased coordination to stop the introduction and spread of invasive species was a top priority for their respective agencies.