The California Invasive Weed Awareness Coalition (CALIWAC) is a partnership of non-profit and industry groups working together to enhance weed control efforts and promote public awareness of invasive weeds in California. 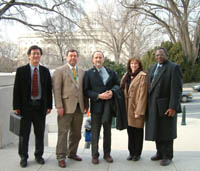 The California Noxious and Invasive Weed Action Plan, published September 2005, was produced by CALIWAC and the California Department of Food and Agriculture to provide a summary of existing weed control efforts and a blueprint for coordinated response and action in the future.

CALIWAC coordinates California Invasive Weeds Awareness Day at the Capitol in early March, bringing weed workers from around the state to Sacramento to visit legislators and discuss the impacts of invasive plants in their district.

CALIWAC worked with the Legislature to declare California Invasive Weed Awareness Week, held the week beginning with the third Monday in July. Weed Management Areas and other local groups are encouraged to hold field tours or work parties to showcase their accomplishments to elected officials and the public.