Biological controls (or biocontrols) are an important tool for restoration workers. For many widespread invasive plants, they may be the only tool that has the potential to control their populations. Cal-IPC helps support the Cape Ivy Biocontrol Research Project. 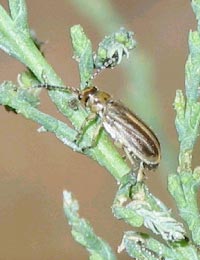 Researchers must conduct extensive host-specificity testing to determine that the imported agent will not damage other plants in the introduced range, either native plants or plants that are important in agriculture, silviculture or horticulture. The testing and results must be reviewed and approved by a national review board, and the entire process takes years. For instance, the 2004 introduction of the Diorhabda beetle on tamarisk (see article in Cal-IPC News, Fall 2004) was the culmination of 25 years of research.

Researchers begin in the home range of the plant, and study which pathogens and insects affect its vigor there. Agents are brought to a testing greenhouse, where they are exposed to a wide range of other plants from the proposed introduction site (California, for instance) to see if they can use that plant. Tests consist of isolating the agent with the plant being tested, and the agent either uses the plant or dies.

The few agents that seem like good prospects are then brought to a special quarantined greenhouse facility in the US. The quarantined greenhouse facility at the USDA Agricultural Research Service Laboratory in Albany, CA, is the only such laboratory west of the Mississippi, and it serves the entire West. Here more intensive testing is undertaken towards satisfying the rigorous permitting requirements.

Currently in California, many active biocontrol agents have been released into the wild. The California Department of Food & Agriculture’s Biocontrol Program previously provided biocontrol agents to county Agricultural Commissioners. Some of the main biocontrol agents at work today are Eustenopus villosus (hairy weevil) and Chaetorellia succinea (false peacock fly) on yellow starthistle, and Galerucella calmariensis and G. pusilla leaf-feeding beetles on purple loosestrife. However, the program lost its funding in 2010.