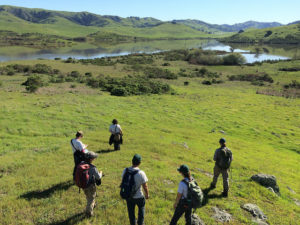 We all know an ounce of prevention is worth a pound of cure, especially for weeds. But how can land managers know which new weeds to look out for? Which weeds are most likely to expand into new areas? Which non-native plants might present a threat if introduced? These are the questions addressed by Weed Risk Assessment (WRA). There are two types of risk assessment: pre-border and post-border. Pre-border assessment predicts which species could be problematic if introduced into a particular country or geographic areas. Post-border assessment predicts the spread of species already inside the border. Risk assessments may address species proposed for importation, such as horticultural plants, or species released accidentally.

The U.S. Department of Agriculture regulates importation of plants into the United States through its Animal and Plant Health Inspection Service, while the California Department of Food and Agriculture has jurisdiction over plants within California. A number of other counties and states, notably Australia and Hawaii, have developed methods to assess threats posed by particular plants. Researchers and regulators try to strike a balance between conducting a thorough asssessment and identifying a few critical factors that contribute to invasiveness. The single factor that most influences a plant becoming invasive is its being reported as invasive elsewhere.

Cal-IPC has also developed risk assessments for invasive plants in California. A grant through Dr. Joe DiTomaso at UC Davis and the UC Integrated Pest Management Program from 2006-2008
funded modeling of invasive plant distribution in California using climate and other factors. We also researched plants known to be invasive in other regions of the world with a Mediterranean climate like California.

We hope the results from this project will help land managers plan their work into the future and will provide information that could be integrated into policy decisions or voluntary business partnerships. Maps (linked below) provide the first statewide information on the statewide distribution for most of these plants. The prediction maps, and the vulnerable areas they identify, are rough predictions only but they give land managers an idea of which areas are most likely to have these plants in the future.