Cape ivy (Delairea odorata), a vine native to South Africa, is now found in most coastal watersheds in California, where it has become a significant threat to riparian habitats. It covers native vegetation and its leaves contain toxins that make them inedible for birds and other wildlife. Cape ivy is difficult to remove manually because it breaks easily and resprouts from fragments left in soil or washed downstream. Infestations are often located in areas that are difficult to access and sensitive to disturbance. There are few native plants or agricultural plants that are closely related to Cape ivy, making it a good candidate for biological control using insects from its home range.

Dr. Joe Balciunas, of the USDA-Agricultural Research Service laboratory in Albany, CA, is conducting research to develop biological control agents for Cape ivy. He oversees work by partners in South Africa, and conducts host-specificity testing in quarantined greenhouses at the Albany lab. Private donations allow Cal-IPC to help fund this work, especially the overseas contributions of South African researchers who assist in identifying Cape ivy’s natural enemies in its home range. (To contribute to this project, visit our donations page.)

By the end of 2006, we had reached the milestone of completing our host range testing of our two most promising potential biological control agents for Cape ivy, the gall fly, Parafreutreta regalis, and the stem-boring moth, Digitivalva delaireae. We have tested more than 80 species of plants, and neither of our candidate agents was able to complete development on anything other than their Cape ivy host.{See sections II & III]

We have collated our results, and are preparing a formal ‘petition’ seeking permission to release both of these agents in the field. This ‘petition’ will be submitted to TAG during the second quarter of 2007. We hope to receive a positive recommendation from TAG within 6 months. The outlook for receiving a release permit from USDA-APHIS-PPQ has improved, but is still not clear.

Another major accomplishment over the past two years was ‘catching up’ with my scientific publications. My administrators made it clear that this needed to be my first priority. A lengthy list of publications that were in various stages of preparation have now been published, or are well on their way to appearing in print [see List of Publications, Section VI.A]. 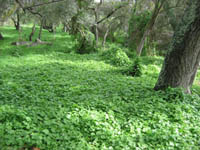