This project targets five invasive plant species for region-wide eradication in the South Central Coast region (San Luis Obispo and Santa Barbara counties): Canada thistle, Russian wheatgrass, Japanese dodder, Dalmation toadflax and European sea lavender. Eradication is the gold standard of invasive plant control because it means the threat from that species has been eliminated (unless the species is re-introduced to the region). It is more effective and more cost-effective than long-term ongoing containment. The species in this effort were prioritized through a comprehensive assessment with regional partners that weighed each plant’s impact, its potential to spread, and the feasibility of region-wide eradication. (Two additional species, spiny emex and stinkwort, were initially considered for this effort but were judged to have recently become too widespread for eradication within the constraints of available funding. This illustrates the need for a quick response to address weeds that are new to an area.) Focusing on these early eradication targets before they spread prevents extensive future impact.

Contracted work on all species began in 2017, except European sea lavender in the Carpinteria salt marsh. The UC Santa Barbara Office of Campus Planning and Design has undertaken the permitting process for work in the marsh. Surveys for two endangered plants, salt marsh bird’s-beak and Coulter’s goldfields, is required for this permitting, and is being funded through this grant. 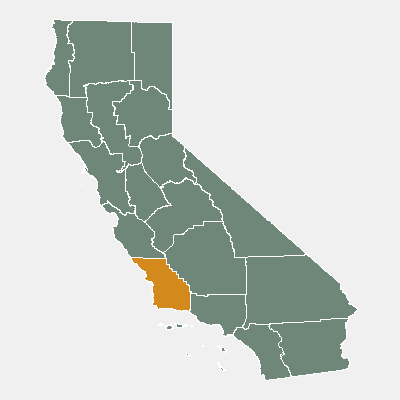 Regional eradication of five species prioritized through a comprehensive assessment with regional partners that weighed each plant’s impact, potential to spread, and feasibility of region-wide eradication. The CalWeedMapper online decision-support tool provided landscape-scale analysis, including future range suitability based on climate change. Though the current area infested by these plants is generally small, the species are expected to spread significantly without management.